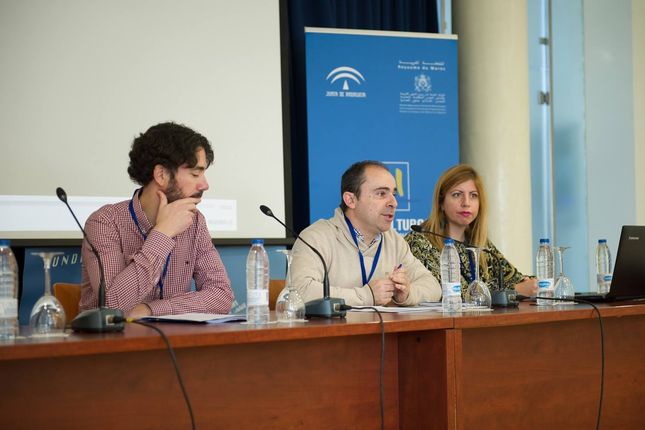 The Tres Culturas Foundation, host of an event framed in the Interreg MED program which supports the "Social & Creative Community” (TALIA)

The Consorcio Fernando de los Ríos, as partner of the horizontal project “Social&Creative” of Interreg MED, has celebrated a workshop in Sevilla with representatives of 16 Andalusian and European projects of social innovation, all of them based on creativity and culture.

The headquarters of Tres Culturas Foundation hosted this local networking venue, which goals where to transfer the results of the modular projects and MED community towards the local territory; and on the other side, being receptors of the initiatives and local agents in order to include them in the design of the ecosystem,

The horizontal project Interreg MED Social aims to draw from a social and innovative perspective sinergies between the different cultural and creative industries in the Mediterranean area. It goals is to create a collaborative and community workplace where innovative projects are not being run isolated and where they results are capitalized: escalated, replicated, policies & programs KPIs, etc.

This workshop had the participation of modular projects at the thematic community Social&Creative, associated partners and stakeholders which are crucial in the thematic area.

The projects presented where PROMINENTE MED (public contracting towards trigging a green increase in the Mediterranean area); CHEBEC (Hacking Mediterranean Economy through cultural and creative sectors) and MD.NET. (Mediterranean diet as an opportunity for a smart economic growth of isolated rural areas).

On the other side, the Tres Culturas Foundation presented two experiences based on creativity and art for prosperity and well being.

CREAMOS, an art creativity project between Andalucía and Morocco with social goals; and CARPET (Craft, Art and People Together), which holds expositions, residence for creators, conferences, study itineraries and other activities planned for the creation of economy and social wealth.

The program also counted with the presentation by Consorcio Fernando de los Ríos of some innovation and local creativity developed at the Red Guadalinfo: #Andaluciadeleyenda by WIKANDA, focused on highlighting the intangible heritage of mystery; “A una hora de”, initiative for the promotion of the Andalusian cultural heritage through the involvement of local actors and influential people on Social Media; and "LA VIEJA ENCINA", International Festival of Terror Movies and Fantasy Short Films.

Consorcio Fernando de los Ríos participates in the European project TALIA, that aims to develop a creativity and social innovation model adjusted to the Mediterranean reality, and which promotes sustainable and impactful initiatives.

It is a cross project by Interreg MED program, which supports through the Social&Creative community various specific project (11 modular projects), linked with Cultural and Creative Industries and/or with social innovation (Open Data, Social Entrepreneurship, Public Sector and Innovation).