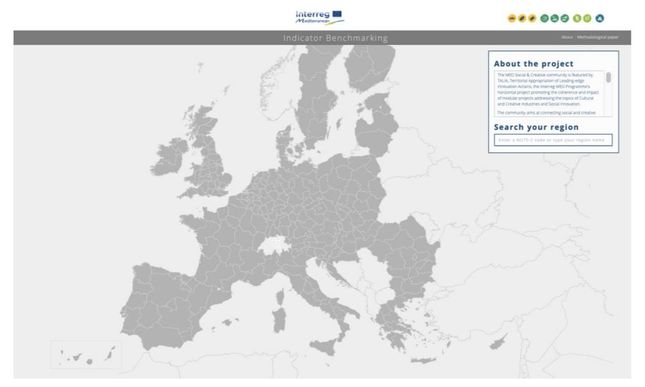 In the framework of the first generation of the horizontal project, TALIA released a methodological paper related to the Indicator Benchmarking Service.

This is a ‘self-diagnostic’ tool assisting MED and EU regions in the development of place-based policies and strategies leveraging creative and social innovation. The service enables benchmarking the performance of MED and EU regions according to the three drivers of Collective Creativity in the Mediterranean that are part of the TALIA vision and policy learning framework: Community Scale Partnerships, Territorial Innovation and Trans-local Socio-Economic Ecosystems.

The service works as follows. After clicking on one region, one can retrieve a predefined set of indicators for that region, which are plotted against: the average value of that indicator for the MED regions, its average value for the “reference regions”, the national and the EU average. Indicators are provided for three groups of variables, namely: contextual variables, including statistics on population, purchasing power standard per inhabitant, as well as the employment rate; 18 explanatory variables, including design applications, public private co-publications, innovative SMEs collaborating with others, employment in MHT manufacturing and knowledge intensive services, and so on; and the so-called “Creative Innovation index”, a synthetic and composite indicator of how a region behaves in relation to Collective Creativity, based on the three elements of the TALIA vision.

In the last phase of the TALIA project, the UNIBA team profoundly revised the existing dataset allowing such benchmarking exercise for two main reasons: first, because there was no availability of regional time series for the majority of the selected variables, which could only be considered for a single point in time; then, because of the strategic value of the proposed service, above and beyond the possibility offered to compare the regional performance in terms of either of 18 indicators.

The new version of the Indicator Benchmarking service  is one of the three pillars of the TALIA Semantic Framework.

Created within TALIA and implemented within the Social and Creative HP, the...

THE 15TH NEWSLETTER IS ONLINE!

What's new in the Social&Creative Community? Read our last newsletter!