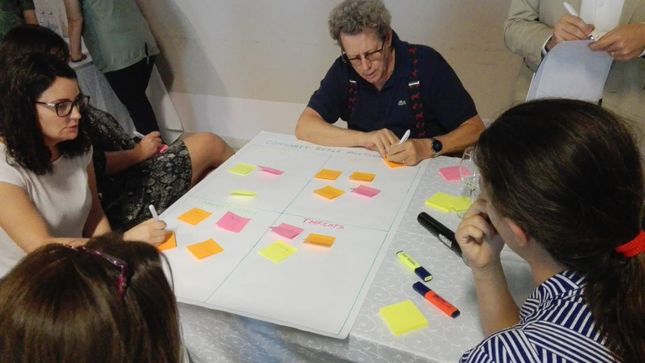 More than 60 participants, representatives of organizations, institutions and individuals, attended the International Seminar of the Social&Creative Community featured by TALIA project, dedicated to Mediterranean Diet and Creative industries.

More than 60 participants, representatives of organizations, institutions and individuals, attended the International Seminar, dedicated to Mediterranean Diet and Creative industries. The event took place in Ethno village “Herceg” in Međugorje (Bosnia and Herzegovina), organized by the MED Social&Creative Community featured by TALIA project in cooperation with the modular project MD.Net.

The event was dedicated to exploration of the correlation between the UNESCO Food and Intangible heritage and the Social & Creative vision.

After the plenary part, which has involved relevant speakers from the Mediterranean, such as Felipe Barata (University of Evora), the interactive session was held, involving all participants in discussion and exchange of information on the relations between Food and Social Innovations, analysis of economic growth indicators and potentials of Mediterranean diet model.

Participants were divided into four groups, each one dedicated to find out strengths, weakenesses, opportunities and threats of the Mediterranean Diet correlated to the four elements of the TALIA Vision: community scale partnership, territorial innovation, trans-local socioeconomic ecosystems and collective creativity.

A lot of interesting foods for thoughts came out. For example, thinking about the trans-local socioeconomic ecosystems, migrations and in general the movement of persons is perceived both as a weakeness and an opportunity; from the collective creativity point of view, ICT leading to self centered society is considered as a threat and cultural diversity and youth education as strengths. Also, the simplification of burocracy for small producers is seen as an opportunity considering the community scale partnerships element and water scarcity, desertification, global warming are considered as threats in relationship with the territorial innovation.

All the collected information will be the subject of further analysis, which will be conducted by TALIA project, in order to define relevant conclusion and streamlines for actions in the near future.