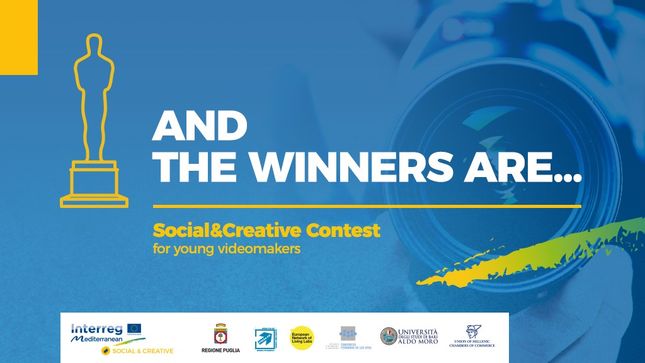 Marco Barone and Laura Longo are the winners of the Social&Creative Contest for Young Videomakers, the contest launched by the S&C Community to describe the nuances and declinations of creativity and social innovation in the MED area, thus giving voice to the protagonists’ stories and emotions.

The videos will be shown on the occasion of the Mediterranean Forum of Creativity and Social Innovation, scheduled in Bari on 15 and 16 October.

Marco Barone, ranked first in the competition with his emotional video "Over the skin - reloaded", is a Sicilian register who decided to tackle the topic of textile and clothing.

Clothes, from the dawn of time, represent one of the primary needs of human beings. The need to cover oneself is in fact archetypically one of the first forms of protection against the surrounding environment. Over the centuries, this need has been contaminated by human culture and its artistic flair. The clothes are, nowadays and to all effects, a second skin, not only because they protect us from external agents but because they contribute to identifying us and telling our personality.
After food, clothes are the thing with which our body is most in direct contact, a symbiosis that accompanies us everywhere. If, however, over the years, a trend and an ethical (and biological) consumption education has developed for food that goes in the direction of a considerable improvement in the quality of life, this in the field of fabrics and clothing does not it still happened in full. Can there be alternative development models? How to recover a relationship that goes beyond mere "consumption"?

Laura Longo ranked second in the competition. Her video tells the success story of an Apulian start-up, I-Pez. "We decided to tell the story of Ipez to pay tribute to the desire to stay in our territory, through the youth and femininity of two girls, Giulia and Federica, who, after their studies, with all the possible open doors, decided to insist on contributing to create business in their city.
They did it on tiptoe, blending popular wisdom with creative recycling, ancient traditions with new forms of saving. We believed that, for their joviality, sympathy and desire to share their project in a social and funny way it was necessary to talk with them and about them. "